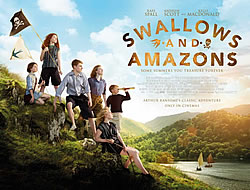 This beloved classic is Arthur Ransom’s answer to Enid Blyton’s Famous Five, with a Famous Six on water.

Between the wars, while their father is captaining a destroyer in the South China Seas, four children and their mother (Kelly MacDonald) head for their holiday home from home in the Lake District. On the train there, a strange man whom they dub Captain Flint invades their carriage, enjoins the children to silence then escapes through a window pursued by two more men.

At their destination the eldest of the children John is given permission to sail The Swallow with his younger brother Roger and sisters Susan and Tatty on a first voyage to The Island and camp there.

In spite of a mishap along the way the Swallows, as the children name themselves, land, make camp and declare the island Walker Island after their family name. However, they soon find the island has already been claimed by the mysterious Amazons. The Amazons attack and reveal themselves to be two young pirate queens with whom the Swallows must engage in a battle of wits for possession of the Amazon’s, as they call it, Wild Cat Island.

Meanwhile Captain Flint appears in ‘Rio’, which the four visit for supplies. He lives on a boat on the lake and his relationship to the Amazons is revealed. Carrying a message of warning to captain Flint from two woodsmen on the shore who teach John the secret of fire, John finds Russian documents aboard Flint’s boat.

The Swallows and Amazons’ contest is complicated by the strange, surly and secretive activities of Captain Flint and the two men. They are Russian spies intent on extracting the Captain’s information about a Russian secret weapon. To avert an abduction the Swallows and Amazons must join forces and bring all of their sailing skills to bear.

Watch Swallows and Amazons and find out the answers to the following cliff-hanger questions. How can John clear his name of theft? Will little Roger’s new swimming skills survive a man overboard fall? What did Tatty see on the lake that night? Is Captain Flint a pirate, a travel writer or a spy? Who will look after Polski?

Director Philippa Lowthorpe and writer-actor Andrea Gibb have wrought Ransom’s first book of the Swallows and Amazons series into a racing tale of courage and co-operation, risk and responsibility, pirates and patriots. The years leading up to WWII when the story is set were not necessarily simpler but were a time when children had more freedom and adults less paranoia. As Mrs Walker says of her brood, ‘I don’t want them frightened of the world’; in fact, frightened of water, of the dark, of strangers all of which fears the children valiantly overcome.

The period is lovingly evoked through biscuit tins and make-believe, Morse Code and matches, playtime and plots. A cameo by Harry Enfield slots in nicely. The traditional female supportive roles are subverted as sensible Susan challenges John’s decisions and badass Amazon captain Nancy and her sister Peggy demonstrate superior sea-person-ship and archery skills.

Not only does the film Swallows and Amazons provide some gentle and picturesque escapism but for those who doubt the next generation’s capabilities this story may provide reassurance and a slackened grip on the reins. As for today’s children, whilst cloistered, monitored and ferried between secure activities they can at least roam in their imaginations with the six on lake in this exciting retelling of the classic Swallows and Amazons adventure.