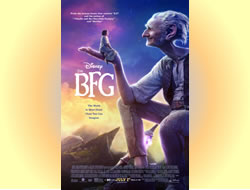 The BFG – Friends in High and Low Places

Insomniac orphan Sophie witnesses the BFG at the witching hour going about his dream delivery business. He catches sight of her and for his own security takes her far, far North to his home in Giant Country. With nine human bean eating neighbours on the scent of Sophie the BFG is her only protection. Sophie sees how he lives in fear and on a revolting vegetarian diet of vile snozzcumbers relieved only by delicious drafts of emerald green whizz-popping inducing frobscottle.

Sophie and the BFG win one another’s trust and he takes her to the Land of Dreams where he harvests both the good and the nightmarish. Back at the BFG’s home however, the nine thuggish giants invade and trash his cave hunting for Sophie. They bully the smaller, gentler BFG who flees with Sophie to return her to the orphanage.

However, Sophie has a plan to rid Giant Country of its wicked population. It involves a nightmare, of child-stealing giants, the combined defense services, Sophie and the BFG, to be delivered to her Magister the Queen. There follows breakfast at the palace, a squadron of bellypoppers, freedom for the BFG and the fulfilling of Sophie’s Dream.

Mark Rylance provides a moving, tender and humorous rendition of the BFG whose magnificent ears hear all of the sounds of the world down to the tiniest insect. Ruby Barnhill gives a natural performance as Sophie. Penelope Wilton has a cameo as the Queen, with Rafe Spall as royal butler Mr Tibbs.

The graphics are seamless and unobtrusive. Stephen Spielberg brings this much-loved children’s classic to the screen with the lightest of touches. You don’t need to be or have a child to enjoy this winning, whimsical story of worlds beyond the realms of normal human experience, of brawnful bullies defeated, and the seemingly impossible coming to pass.

Sophie out of loneliness and deprivation finds a friend and ally who was just as alone. Together they change their lives by expecting the best, going to the top and learning that help can be found in the most surprising of places both small and great.