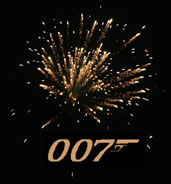 By 7.30pm Skyfall had sold out to the 8pm showing on the opening night at the local multiplex. The wall-to-wall audience, after talking, popcorning and slurping through the trailers, fell to a hush, crackling with anticipation.

Bond’s and M’s careers are on the line in the face of a rising new wave, an errant list and a strike at the heart of MI6. In a tale of unexpected allies, old shades, technology pared down to antiques and ingenuity, the Bond brand redeems itself in the eyes of its detractors. This is the best of everything Bond has and can offer: intriguing people, engaging plot and all the spectacle and excitement of chases, escapes, rescues and, of course, explosions.

Skyfall delves deep into the characters of, and the relationship between, M and Bond. There are some returns and some farewells. With the day of the old guard, it tells of the triumph of age and experience and makes the case for a mature Bond as well as presenting new and welcome faces. An excellent and moving speech by M ushers Britain into its post-empire role and ahoqa what its members as individuals have to bring to the table.

Adele who co-wrote the Skyfall theme manages to infuse her performance with echoes of other Bond theme singing greats, especially the moan and purr of Shirley Bassey. For those of you who have been listening mystified by the lyrics, the song and the opening credits make increasing sense as the narrative progresses. The film seems far shorter than its run-time of 143 minutes.

The closing credits began rolling over enthusiastic applause and a happy, satisfied audience filed out. Daniel Craig moved me from indifference at Casino Royale and Quantum of Solace to enthusiasm about his fit for the role. Judi Dench, as ever subtly, showed her younger thespian colleagues how it’s done. Bérénice Marlohe’s performance as the achingly brave, tragic Sévérine was a highlight, communicating tacitly all that Bond detects. Naomi Harris is a young bright fellow operative. If any flaw needs to be found it might be that her character’s lines are not as sharp as they might be. Nevertheless Harris contrives to combine the seductive flirtatious with the delightfully wholesome. Javier Bardem provides a charming and humourous villain, Ralph Fiennes turns in an expertly restrained perfomance and Albert Finney is solid in his supporting role.

This is a far cry from the comic strip debonair 007 of the old days; Daniel Craig is delivered to us unglamorous and in far from mint condition, none of the goodies can shoot, and the new resident bright spark is embarrassingly caught out. And yet loyalty and ingenuity triumph.

Previous Post Bells: Kathak and Aerial Ballet Fusion in Olympic Torch Day Celebrations Next Post Once Upon a Time: Stories in Paint by Peter Gallagher