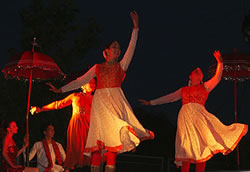 Some seven hours after the Olympic Torch had passed Victoria Park, Finchley, came the grand finale to the town’s historic day in the sun. Sitting on the grass in front of a temporary stage, families, couples, friends and singles, were invited to a wedding of earth and sky, east and west.

Entering the Long Lane gate and chatting with a young lady clutching a sheaf of programmes I was delighted to learn that, in addition to the aerial display by the Belgian Theater Tel I’d come to see, attracted by the crane rising above the chestnut trees, there was to be a Kathak performance. At least as demanding as Western Ballet, Kathak is Indian classical dance, both stylish and exciting, and distinguished by anklets of bells worn by the dancers. These are rung by the impact of the foot on the floor in a difficult-to-achieve splat of a stamping motion. Shortly after 9pm a violinist with fascinatingly pompom-ed and wired coat tails took the stage and settled the audience with a solo.

The crane moved and a single angel suspended above the crowd, who was chastely attired in bloomers beneath her appropriately bell-shaped hooped skirt, dispensed confetti like a blessing on the upturned enchanted faces below. As the winged vision retired, the sounds of an Indian song rose from the vocalist on the stage greeting the entrance of a bride trailing a veil of balloons, and red clad attendants who brought our attention back to the ground. The Kathak group made their entrance with the universal elegance and poise of the classically trained dancer. The red and white party disported themselves charmingly on the stage to the violinist’s rousing tones until they released their balloons into the sunset.

The bride saucily shed her white, lace confection for a red, sequined, after-party mini dress and danced with the groom, a male Kathak dancer. The couple sat down to be entertained as the Kathak party began their first routine. Not only did the troupe display outstanding grace but amazing stamina. An auditorium view would have shown that, along with the gentle arm and body movements, the constant, fast, footwork requires great strength over the course of long routines. Exquisitely choreographed by Urja Desai Thakore of Akademi, the dancers sometimes moved in unison, at others in canon, grouping and regrouping in different sets, at different speeds and rhythms so that the eye was teased and fascinated. 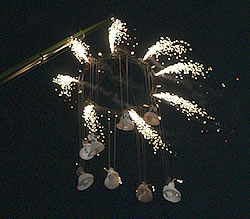 As the dance wound towards its conclusion a huge ring rose UFO-like from behind the stage. The furious jingling of the Kathak bells subsiding, the dancers saluted the outsize upturned bells of the angels’ skirts as they were lifted, suspended from the ring. Each skirt was rimmed with a circle of small red lights, hovering eerily in the twilight. The curiously well-endowed host of angels gleefully scattered the crowd with glitter then released a fine dust caught in the spotlights. Next they produced sparklers and finally released fireworks jetting out high over the delighted spectators. The finale and cast taking their bows were met with enthusiastic applause and the audience dispersed into the night still buzzing from the spectacle.

The performance was blessed with perfect weather and executed at the ideal time of evening. The lighting allowed us to view the display against the dusk then gently added lights until full illumination enabled us to catch the costumes, balloons and glitter; sometimes by the hot red of passion, at others the cool bright light of white. The link between the Kathak dancers and the aerial bells was loosened when one then the other took centre stage but never broken, and at their best when the elements of sky and earth were united. This was Indo-European fusion celebrating the richness of our cultural availability as our city welcomes visitors from all over the world.

If it’s ever repeated, this is a must-see show. If it’s the only one I get to this year I’ll still be happy.

Previous Post The Wedding Video: Wait for the DVD Next Post ‘Skyfall’ – The Rise of Bond and the Day of the Old Guard