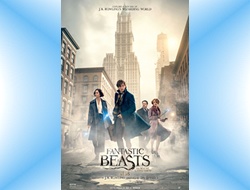 Fantastic Beasts and Where To Find Them – Redmayne to the rescue

Newt Scamander (Eddie Redmayne), a diffident British Ministry of Magic conservationist arrives in 1920’s New York on his way to make a delivery of choice mystic wildlife. Whilst passing through he must contend with local anti-magical-creatures laws and an Obscurus, a dark powerful force, ripping through the city at will.

Newt’s progress is further impeded by the escape of his magpie-minded niffler, by Tina, a demoted aura intent on regaining her position and a psychotic witch-hunter with her sinister coterie of young assistants. However, charming No-Maj (U.S. muggle) baker, Jacob Kawolski and telepathically gifted Queenie, Tina’s sister, come on side.

THere follows a tale of escaping magical fauna, MACUSA, the US Ministry of Magic, a dark wizard oddly named after a picturesque town in Switzerland, arrests, escapes, murder, mayhem and a Men in Black style memory remover.

Fantastic Beasts is a commendable effort to make our American cousins feel part of the Harry Potter World Show by mining Hogwarts history for the author of the to-be-famous text book Fantastic Beasts and Where to Find Them. The action is unquestionably attention grabbing straight off the bat. The character element is however carried by the adorable Eddie Redmayne as the shy, compassionate hero and Dan Fogler as the loveable pattiseur. Emotional involvement with any of the other characters is challenging, especially given the irritatingly obstructive character of Tina. The absence of chemistry between the two leads, in particular, makes for a lacklustre story. Samantha Morton as witch-finder queen unsettlingly conjures the kind of evil we can understand in the real world. Colin Farrell as a MACUSA bigwig keeps us guessing as to which side of the fence he stands.

In terms of a Feel-better Rating, Fantastic Beasts provides some enchanting distraction. There is, nevertheless, some dark matter dealt with: child abuse, suppression, administrative and organisational paranoia, and capital punishment. The child abuse theme may be cathartic as the offenders get their just desserts, and raise someone up the emotional scale from depression to justifiable anger but on the other hand the subject may act as a trigger.

Die hard Rowling fans will lap it up as at an oasis in a now parched Harry Potter landscape. (Rather like the Silmarillion to many Lord of the Rings fans, only with a lot less genealogy.) With the usual visually imaginative swooshing, bricks flying down streets and quickdraw wand shoot-outs, at times the CGI takes over with such speed of motion it is difficult to interpret. However what is really worth paying the pay-per-view tag for is the Tardis-type suitcase menagerie of breathtakingly cute or majestic creations, the film’s true source of wonder and delight.