In the 1920’s, with the emergence of the Talkies, research was undertaken to discover the impact of movies. A battery of 13 studies revealed that emotions, attitudes, behaviour and health were affected. The findings were supported by a study in the 1990s. Although they focused on young people and the potential negative effects of watching films, of inciting violence and aggression, the results can also be viewed from the positive end of the emotional spectrum.

An avid reader since childhood, at university I studied, among other things, story-telling. It is one of the oldest forms of entertainment. The audience can be inspired, cautioned or comforted by tales and sagas. In short, the hearer’s emotional state is altered. To the craft of the orator we have added songs, books and now films.

I have observed and interviewed those who have accompanied me to see movies and those to whom I have recommended or lent DVDs that I think will improve their position on the Emotional Scale (deep depression at the bottom and joy and exhilaration at the top). In the vast majority of cases they have expressed an improvement in how they felt. You have probably noticed it for yourself in a cinema at the end of movie when the audience has applauded or you can feel and hear the happy buzz, as the audience files out, that was absent at the start of the movie.

Each film reviewed by Heypressto has a ‘Feel-better Rating’ to give potential viewers an idea of how it might raise their mood. This does depend on where you are on the emotional scale to begin with but you may find it helpful in making your choice of what to watch, give as a gift or suggest to others.

The main questions used to evaluate a film’s Heypressto Feel-better Rating are:

What the Heypressto Rating is Not

The Heypressto rating is not an evaluation of a film’s cinematic values: cinematography, design, direction, acting, and use of colour, for example. Although these do contribute to the effectiveness of the emotional experience and only those films that I can review positively regarding at least one of these aspects appear on heypressto.com or elsewhere.

The Emotional Scale is discussed by Esther Hicks in her book Ask and It Is Given. She describes attaining the top of the Scale as ‘getting into the Vortex’ where the good things you wish for in life come the quickest and most easily, as events and opportunities sweep them inwards towards you. So each ratings icon is a mini vortex with the light of beneficial and desirable circumstances and well-being in the centre. The ones that score the highest, 4/5 or 5/5, from 1941 to 2015 have made into the Fifty Feel-better Films project, but more are being produced or discovered by Heypressto. If you have any in mind that you have found particularly effective in improving your mood or that of someone close to you, please contact me and let me know so that it can be reviewed and included here.

Watching a film you can take the emotional journey without physically having to travel to Mount Doom with Frodo in The Lord of the Rings, or throughout with Luke Skywalker in the Star Wars movies or to archaeological sites with Indiana Jones. We respond emotionally and instinctively to events whether real or imagined. Let’s try an experiment. Years ago I had a protracted illness during which I had of necessity neglected my housework. One day, cleaning up, I tracked a foul smell in the kitchen to a bag of potatoes on the floor. At the bottom I found a writhing mass of maggots that had spread out onto the surrounding vinyl and had to be gathered up and the vinyl scrubbed to within an inch of its life. The next day the sunshine opened the roses in the garden and the breeze blew their perfume through the garden door and filled the house with their fragrance.

The chances are that in the course of reading that narrative, you felt repulsed and your nose wrinkled in an animal reaction to prevent you inhaling noxious fumes. When you read about the flowers you felt relief and your nose relaxed. Yet you were not physically present in either situation. Now add the power of glorious Technicolor and Dolby surround sound and the experience is likely powerfully enhanced.

Movies and mood are linked. Learn how to use movies to positively influence your emotional state and you will be empowered by your film experience. 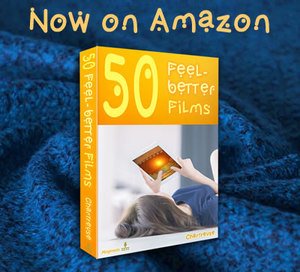