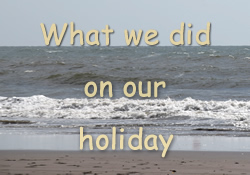 Gordie McLeod (Billy Connolly), on the West coast of the Scottish Highlands, is about to celebrate his 75th birthday. In London son Doug (David Tennant) and his estranged wife Abi (Rosamund Pike) prepare themselves and their three earnest children for the event, urging their offspring not to tell their grandfather about the breakup. The shock could exacerbate Gordie's heart condition. The children object to the deception. Lies and truth are in opposing camps; they are inducted into the grey areas of ‘white lies’ and withheld information. Serious, bespectacled Lottie records the lies they must tell in her notebook, little Jess insists on bring specimens Eric and Norman, and Viking and knot-tying aficionado Mickey comments graphically on health and safety issues whilst travelling. A strained journey north follows.

Gordie spends the morning on the beach with his teenage grandson Kenneth who is practising the violin, concentrating on his exam pieces in accordance with his father Gavin's instructions but Gordie roguishly encourages him to let loose.

The family are welcomed by the managing, social climbing brother Gavin and his neglected wife and youtube star Margaret. Gavin sets about bullying Doug and Kenneth and tries to impress the London family with his ‘intelligent house’ while enjoyably Mickey and Jess quiz him embarrassingly about the source of his wealth. Doug discovers his wronged wife is seeking leave to remove their children to far-flung Newcastle where she has a new job lined up.

Gordie takes the children off to the beach while on-the-day preparations are made. Gordie reveals he is 84 percent Viking and so would like a Viking funeral, cremated in a boat sent out to sea. After playing dead for the children’s entertainment, the unthinkable happens and the children unite, combining their ingenuity, to carry out their grandfather's last wish. The trio set to beach-combing, dragging, tying, building and driving past sunset. They return late to the celebrations with the ultimate party-killing news. Blame and recrimination erupt as Doug and Gavin battle with their shock and grief.

The police and the coastguard arrive with the media hot on the trail, the guests trickle in for the party ignorant of Gordie’s passing, and Margaret’s depression surfaces like a killer whale into Gavin's consciousness. Miss Chisolm (Celia Imrie) of Child Welfare is also in train, threatens an intervention and appropriates The Book of Lottie. Gavin offers the guests the excuse that the kids,’…they’re from London.’

The following morning as the press put the parents on trial, only the threat of losing the children can build a bridge between them. Death becomes a catharsis for the living. Jess helps them see life from Gordie’s perspective and the family becomes reconciled to each other in a farewell gathering of the McLeods.

Writer-directors Andy Hamilton and Guy Jenkin have given us an honest but warm story of an average family. Billy Connolly is charming and philosophical, rebellious and independent. Rosamund Pike, wounded and prickly as Abi and David Tennant as the goaded and guilty Doug still manage to convey the characters' love and concern for their children. The severe Miss Chisholm is played chillingly by the usually saucy Celia Imrie who gives us a flash of the familiar before she exits. There is a cameo from Annette Crosbie, from a magical kingdom. Amelia Bullmore's Margaret admirably conveys the disintegration behind a calm and coping facade, while Ben Miller as Gavin is comically tense to breaking point. Emilia Jones (daughter of Aled) is outstanding as Jess. She, Bobby Smalldridge as Mickey and Harriet Turnbull as Jess are entirely believable as modern middle-class youngsters at the heart of a collapsed marriage. The younger two especially, rather than given lines were simply told the story they were playing out and left to ad-lib. My movie buddy's favourite character was the diminutive Jess for her free thinking and independent spirit.

Watch What We Did on Our Holiday to discover: the identity of Liam, why the intelligent house gets applause, how Mickey sees his god and Kenneth finds in the midst of death he is in love.

What We Did On Our Holiday is some of the best of British dark humour, gentle, dry and philosophical, comforting as an old pullover. Although dealing with death and dysfunction it yet contrives to be fluffy and funny. Perhaps yes, a trifle clich´d but the sentiments bear the reiteration well in this film: as Gordie summarises, ‘No point in being angry with people I loved for being what they are’, ‘think less and live more’. Appreciate life and the living, and enjoy the star of the show: scenic Scotland, in the sunshine, at its most ravishing.