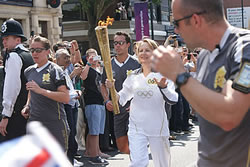 Here is the Olympic Torch passing through my beloved hood.

Even an hour before the golden, giant, flaming, ice-cream cone appeared, the atmosphere was excited and happy and not just because of the radiant sunshine and temperature in the 20s. People were gathering outside and opposite The Joiners Arms. The beer garden was buntinged-up for the occasion, bright with cerise petunias and drinkers in summer colours 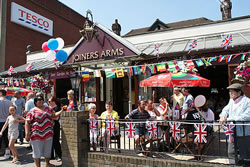 A policeman had helpfully explained the approaching sequence of events and advised me about when to get into position to get my photographs. Just to the left of the barrier in front of the pub, I was in an ideal place to be able to take one legal step into the road at the crucial lens-clicking moment. I stayed in my sun spot, protected by a khaki cap and SPF40, with perspiration running south.

First came a squadron of police motorbikes to check the route, received a cheering welcome, and were followed by the merchandisers to fire up the crowd. I had no idea I was partisan about my little town until a megaphoned man from the rabble-rousers’ vanguard called out, ‘Hendon was good but Finchley is amazing!’ (Apparently they said they used that formula everywhere and it went down a treat.)

The Samsung cheerleaders on top of their bus got a suitably appreciative response, the Coca-Cola van was hailed and even the Lloyds van got several smiles. Suddenly she was there in the frame of my camera lens, the lady with the Torch, Danuta Ryland, flanked by grey clad runners. The crowd cheered, photographed, and waved hands, flags and divers Olympic ware. A van followed then a peloton of cyclists and suddenly the road was business as usual.

The police had done a superb job of keeping traffic disturbance to matter of a few minutes. They had kept the crowd safe from the wheels and pounding feet of the procession, and ensured the unimpeded progress of the Torch contingent, interacting kindly, firmly and patiently with crowd whose cheers, waves and smiles indicated pride in our Metropolitan Police force as well as our Olympic team and spirit. The police quickly strode back to their bus for the next stop, a queue formed around the Coca Cola bus for free commemorative bottlesworths, people milled browsed or dispersed. The shopkeepers and restaurateurs retired elated and the buzz quietened to a hum that was still there the next day. 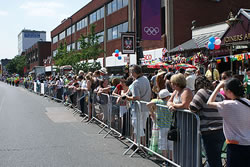 I have lived here all of my life and never experienced anything like the enthusiasm, sense of community and buoyancy of that entire day including the performances in the park. I wondered why the Jubilee paled into insignificance beside it. Could it be that, like me, people perceived the Jubilee celebrations to be English rather than British? For immigrants and the children of immigrants there seemed to be no purchase, no point of emotional reference for us. It seemed to be a sort of 1950s home counties extravaganza. Perfectly acceptable just not universally accessible.

Olympic Torch Day, by contrast, was a truly British event and very much of the people with a local Polish (non-celeb) lady bearing the mighty flame. Our Olympic team is of global extraction to reflect our nation. The Olympic event is modern and it will leave a dynamic legacy. It is both now and future. Even the running torchbearer is a symbol of forward movement. The games with their roots in, albeit temporary, peace between feuding nations reflect cross-community hopes and wishes. For the two minutes when the torch passed through there was no Them and Us. There was only Us. And I predict that, when I am 102 and unable to recall what I said 30 seconds ago, I will still remember that day back in 2012 when the Torch came to our town.