RC Virgin part III: The Seagull – Flying in the Alps 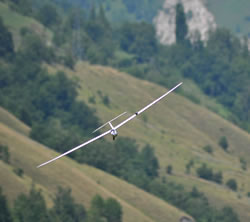 I was welcomed into the world of radio controlled model aeroplanes by a chance met man who was to become my boyfriend then partner.

After lifelong enthusiastic involvement with RC controlled planes, cars, helicopters and airboats he and I had investigated the new foam gliders as described in Tragedy Strikes – Flying Foam and returned to balsa constructed planes with the purchase of an electric glider, The Seagull.

Is it a bird? Is it a plane? It is both. it takes to the skies as a young bird ascending to the element for which it is born. Above our local flying field it showed its floating paces from the moment my boyfriend hand launched it an angle suited to the plane and wind. It seems at times to sit on the air, a white angel on a cloud. Responsive and apparently moving with slow grace it can be surprisingly fast and runs in to land at a lick, but my boyfriend frequently has it come to rest at his feet repeatedly showing me a textbook landing which I hope with practice one day to achieve. 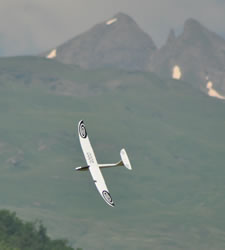 During this time he had realised his vocation and was looking into establishing a business which would combine his particular talents of RC piloting and photography. Both the iFly and the Scorpion were proving unequal to the task in terms of reliability and stability and he had begun building his own quadcopter. Meanwhile he had the idea of seating his keychain camera the 808 in the cockpit of the seagull and the results filming from over our London flying field were encouraging.

The unexpected bereavement of the favourite family member who had gifted my boyfriend with the love of flight called him immediately to Switzerland. With only a few days to pack and prepare, I determined that I would learn to fly a glider in the Alps. Consulting reviews and seller sites on the internet we decided the best option for me was Thunder Tiger E-Hawk 1500, a built-up, motor-powered electric glider with a wing span of 1500mm. My boyfriend-and-piloting-and-engineering-trainer-in-one had had two friends each of whom had owned hawk and so he had seen it in flight with enthusiastic comments from his flying buddies. I surfed and telephoned relentlessly without success in finding anyone with one in stock. On the day before our departure we visited any store within reach that might have one on the shelf. At the last shop, and intent on leaving the UK with a glider I purchased, in the absence of any built up plane, a foam model which with the Seagull fitted into our borrowed roof-box. We rose and departed before dawn for the white cliffs of Dover and the boat to Calais. 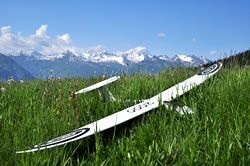 After we left, came the information that the funeral had been postponed. With time on our hands, my boyfriend suggested a visit to Bourg-Saint-Maurice, in the Alps where he had lived and worked for at least four years. I agreed with enthusiasm as I had heard so much about this town and its nearby resorts from him though he had been disinclined to return on this trip which was already emotional enough without being reunited with old friends and memorable places. This was an expected treat.

After recovering from the journey we drove up Mont Pourri which faces Bourg in search of a flying field in which the glider could be landed safely. We found an idyllic spot at around 1800m above sea level on mountain pasture studded with alpine flowers and stretching up into rocks and snow behind on either side and misted by distance on the opposite side of the valley far below. The sun shone hot out of a deep powder blue sky, sharpening the shadows.

My boyfriend launched the glider with the propeller spinning and it took to the air, climbing so high I struggled to find it through my SLR lens. It gently turned under the carefully judged pressure on the transmitter stick under my boyfriend’s right thumb, rising now and then on a rare thermal, making slow, patient circles over the mountain side. After a tour filming with the 808 keycam, we found a way to secure the GoPro, the popular mini HD camera, with tape. This time it was more important to keep the plane steady and level in spite of high altitude winds.

At the car nearby, we instantly loaded the footage and soon saw a view rarely if ever witnessed, too low for a plane and although film-able from a helicopter, the video was accompanied only by the sound of the wind and the occasional whirr of the prop taking the glider back up when necessary. He had shown remarkable skill judging the view from the 808 and the GoPro. It was breath-taking. That was when we knew. If this was what he could do with a glider, with a quad and a GoPro, he could film from the air, resorts, chalets, property, construction, archaeological and, best of all, extreme sports. The glider had given us a new perspective. The possibilities were limited only by our imagination. In that instant, what was to become Flyclopsfilming was born.

The film and stills were impressive for a glider and keychain/Gopro combo but the slopes that seemed a carpet of green from a distance concealed rocks and a the gradient too unrelenting for a safe landing. On our return to France after the funeral we went in search of more level ground and found it, on the day before our departure, in a valley near Bourg. It was here that I finally flew in the Alps. Though not for long. My foam glider was unsatisfactory, and unsafe in my far from experienced hands although I was allowed the thrill of tooling the Seagull a short distance around the skies. As I was learning, judging distance is a key issue when flying. I shouted for help when I was sure the glider was about to plough into a mountain side which turned out to be at least 2 miles distant. But I had done it. I had flown a glider in the Alps. 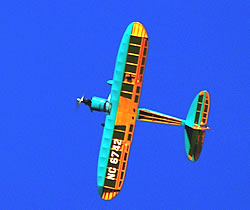 Knowing the contrast with a built-up plane (like the Phoenix Rainbow shown here), there was no going back to foam for either of us. There was however to be a return trip, this time with Flyclops 1, the newly built quadcopter with which footage and stills were collected in France, Switzerland and Italy. I captured photographs of the quad wherever we filmed for marketing my boyfriend’s aerial photography business and made notes for articles to write. But still for me no flying, with only the flapping foam glider, a faulty drone and not an E-Hawk to be found.

Back in London finally I sourced the scarce E-Hawk kit in a hobbyshop about half an hour away. At once I began learning how to build a kit as my boyfriend showed me how to spread out the plans and lay the pieces on top, then how to glue them together. I ordered the same orange covering that distinguishes the glorious Rainbow trainer plane and he demonstrated how to cut the sections to size and apply them to the wing and tail pieces using a special hot iron. I see it gradually coming together. 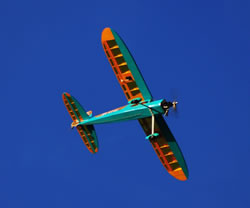 Reluctant to inflict an outsider on a family event, I did not attend the funeral but spent the afternoon pleasantly, writing in a cafe near the cathedral. At about 4 o’clock as the toxin tolled across the town, the sun went in and the wind rose while overhead two pilots flew their planes low in salute. Later, on a tourist’s visit to a church, I lit a candle to the man who, through infusing his beloved relative with his love of flight, had unknowingly bequeathed it through him to me. As he had given my boyfriend his first plane so had my boyfriend given me my first quad. Just like them both, I could now be transported in spirit into the air.

My grounded days are nearly over. There will soon be tales to tell of E-Hawk flight training and buzzes around the house and park with the new miniquad. My partner intends to teach me to fly his business quad as well as the next one in the making. And in the process of watching two quadcopters being built, and acquaintance with 4 other multi rotors, reading forums for troubleshooting and listening to his explanations and speculations I would now, he tells me, given the parts and with himself in the room, be able to build one of my own. I can tell an ESC from a PM, a KK2 from a DJI, understand the importance of voltage levels in a LiPo and expound on the merits of carbon fibre. There is still a great deal of technical knowledge to acquire, a fleet of my partner’s aircraft to learn to fly, and with them and the E-Hawk, a world of new skies to explore.

Photocredits: Seagull in the grass by Flyclopsfilming; Phoenix Rainbow images by Johan Jonker