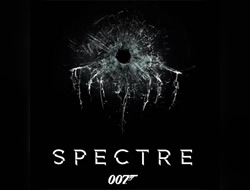 ‘Spectre’ – Blasts from the Past

12A, Eon Productions and MGM.

James Bond (Daniel Craig) is out of order, on a personal mission set from beyond the grave: to execute one Sciarra currently in Mexico City and avert a terrorist attack. On the Day of the Dead, Bond’s endeavours lead to an explosion, a life or death struggle in the air over a crowded square and his retrieval of a ring bearing a ghostly device.

Back in London Bond meets the obnoxious ‘C’ (Andrew Scott), head of the shiny new Joint Intelligence Service, who plans to archive the ’00’s and spearhead ‘Nine Eyes’.

In spite of being officially grounded, Bond absconds to Rome for Sciarra’s funeral and finds the grieving widow, the lovely Lucia (Monica Bellucci). By his usual persuasive means, Bond discovers from her that the organisation with whom Sciarra was associated is shortly to meet. With the ring as passport he enters the conference and remains unseen long enough to hear a single name, a blast from the past, a Mr White, whom he tracks down.

Bond is now on the trail of SPECTRE, Special Executive for Counter-intelligence, Terrorism, Revenge and Extortion, which first intruded into the Bond experience in the 1960’s led by arch villain Blofeld with his hallmark white Persian cat. SPECTRE is revealed as responsible for terrorist attacks implemented to unnerve 9 governments into amalgamating their intelligence networks into Nine Eyes’, to which SPECTRE will have access, championed by C and due to go live in within hours.

Accompanied by White’s daughter, the grave and curvaceous Dr Swann (Léa Seydoux, Midnight in Paris) and pursued by SPECTRE heavy Mr Hinx, Bond must reach the heart of SPECTRE, and its head, Franz Oberhauser (Christoph Waltz), destroy them and return home in time to catch the London mole and stop the fatal Nine Eyes clock.

Daniel Craig combines energy with world-weariness in a watchable Bond he has made his own. Christopher Waltz expertly portrays a potently irritating Oberhauser and Léa Seydoux conveys a woman who is Bond’s psychological equal though with a very different style. World wrestling champion and martial arts expert Dave Bautista is SPECTRE henchman Mr Hinx and credibly a match for Bond. Andrew Scott is spot on as the love-to-hate little man bureaucrat ‘C’. There are also appearances from Monica Bellucci (Matrix Revolutions), Ralph Fiennes as M, regulars Ben Whishaw as earnest geek Q, Naomie Harris as Moneypenny and Rory Kinnear as M16 head Tanner. Judy Dench is conspicuous by her absence but with us in spirit through a video message.

The splendid Skyfall team of writers, Neal Purvis, Robert Wade and John Logan have reassembled with the addition of Jez Butterworth to craft an entertaining and compelling tale under Sam Mendes’ direction. They take us on a tour through Mexico, London, Rome, Tokyo, the chill of the Austrian Alps and the glare of the African desert. Red Bull Air Force pilot Chuck Aaron performs the astonishing helicopter stunts, and Sam Smith gives a heart-felt rendition of the ballad Writing’s on the Wall by Grammy award winner Jimmy Napes.

Spectre adds to the Bond back-story to which we were treated in Skyfall. Its heroine is a woman who has given herself a conventional adulthood after growing up with the uncertainties of a secret agent father but drawn back into the ring. She is a possible match for Bond, orphaned then fostered by a family that likewise returns to haunt him. Loose ends aplenty loom from the past as Spectre connects the dots between Bond’s opponents of recent years, the previous M (Judy Dench) and the current Bond girl.

Even on a Tuesday afternoon, sampling the obscure delights of 4K resolution, there were about 35 in the appreciative audience of hard-core over 50’s fans who would have grown up with the chance to see every Bond film on its cinema release.

Although Skyfall was arguably more emotionally involving and enriched with more quips, nevertheless Spectre sports gadgets, Q in the field, Moneypenny, The Car, the Aston Martin DB10 on a rush through the roads of the Eternal City, and the blowing up of a South London landmark.

Watch Spectre to discover what ‘C’ really stands for, the identity of the Pale King, and how the Bond car backfires.